Autumn days are finally upon us, and that means that Halloween is just around the corner.

So to lead up to the spooktacular day, we thought we’d share the most startling stories of Liverpool city centre.

From terrifying seances to spine-chilling time slips, Liverpool is bursting with mystery.

The Cavern Club: A Visit from the Devil

It turns out that the world famous Cavern Club isn’t just spiritual home to the Fab Four.

Legend has it that the musical venue where the Beatles made their mark is also home to ghostly spirits.

Tom Slemen’s tales note that the manager of the Cavern during the 1950s claimed the ladies toilets were haunted by a ghost.

Not only that, but guests had reported sightings of the Devil himself wandering the iconic club.

Though you may be thinking the location is unlikely, one theory says that the building had been built upon an underground temple.

And Mathew Street is named after Victorian merchant Mathew Pluckington, who is said to have been accustomed to Devil-worship for business deals.

Slemen’s story tells of the late 1950s, when the Cavern was still a jazz club.

It begins with three club-goers called Johnny, Tony and Peter, who stayed late into the early hours with their girlfriends.

The group of friends sat talking about everything from politics to religion, eventually fuelling a heated discussion about the occult.

Rita pointed out that the Cavern’s toilets were supposedly haunted, but Peter suggested it was merely a publicity gimmick.

Overhearing Peter’s remark, one of the management staff explained the ghost had been seen recently, adding fuel to the fire!

Amidst jokes and excitement, the group gathered together in a lighthearted yet eerie torch-lit seance.

Tony however, lit up a cigarette and sat at another table. While not religious, he felt dabbling with the devil shouldn’t be joked about.

Sitting around the table, Johnny said, “O Lord of darkness, I invite you into the Cavern. Give us a sign so we may believe.”.

Soon after, a tall shadow appeared in the darkened room and a man dressed in a black suit emerged. 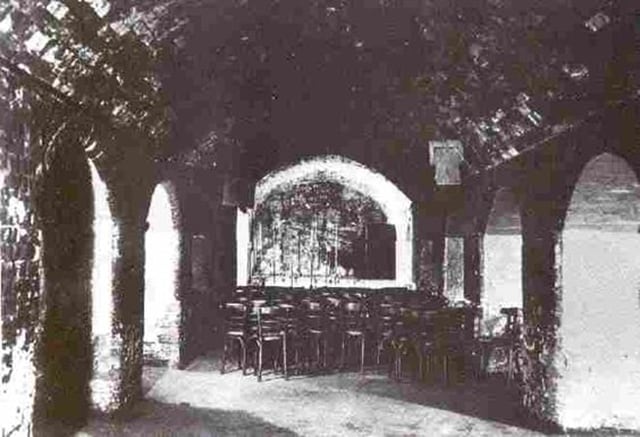 The girls weren’t afraid of the man’s appearance, noting his magnetic dark eyes and attractive face.

Meanwhile, Tony remained seated away from the group. He had noticed that the man appeared from the toilets and instantly felt that he was evil.

The man exclaimed that he was Lucifer, scaring Rita who began to shake. The man declared, “If you believe in God you must believe in me too. Unless you are an atheist of course.”

Peter was asked to give the devil his soul. Feeling uneasy but maintaining a humoured facade, Peter said, “Okay, take it then.”.

The ominous figure reached out and clutched at the air where Peter was sat. Their torch began to fade and the Cavern Club was filled with blackness.

As fear crept up on the group, Tony banished the man in the name of Jesus Christ. However, a voice whispered, “I’ll be back for you one day, and your god won’t be able to save you.”.

When the lights suddenly switched on, Peter was found to be slumped on the table, seemingly drunk.

Upon returning home to Smithdown Lane, the group noticed that Peter didn’t appear to be breathing.

After seeking emergency help, Peter was certified dead on arrival to the Royal Hospital.

While his body was found fit and well, the only conclusion was that he had died of natural causes.

Of course, the group of friends believed that the sinister seance was the cause of it all.

Serving as a Stone Quarry until 1825, you’ll find the eerie yet fascinating St James’ Cemetery behind Liverpool Anglican Cathedral.

The Grade I listed Historic Park and sunken graveyard is home to nearly 58,000 Victorian and Edwardian graves.

This includes that of a Sea Captain who was murdered and a Midget Artist who had lived her early years in a Victorian Freak Show.

Myth has it that the cemetery is haunted by a number of ghosts and even an entity bearing the figure of a vampire.

Reported sightings include William Huskisson MP, laid to rest in 1830 after being killed by the Rocket locomotive.

William Huskisson MP has been said to have been spotted leaving his grand mausoleum memorial.

Some sightings have reported seeing him dressed in a top hat and cape, roaming the cemetery.

Others have recalled hearing his footsteps surrounding the mausoleum.

If you ever find yourself strolling through Bold Street and casually through time, then you’re not alone!

The bustling street of independent shops, bars and restaurants is one of the prime spots in Liverpool for unexplained happenings.

What is particularly fascinating about reports from Bold Street is that they all occur around the same area and period of time.

The paranormal phenomena surrounding Bold Street has been linked to the powerful electricity from Central Station.

Not forgetting, Liverpool was built upon sandstone. Some suggest that the quartz from sandstone could create a magnetic field, affecting both time and the mind.

In 1996, husband and wife Frank and Carol were strolling Bold Street and his wife went to browse Waterstone’s book shop.

Frank decided to visit another shop first, and agreed to meet her inside. However, upon his return he saw the name Cripps above the door.

Adding to his confusion, a van with the name Cardin’s sped past him along the road, honking an old fashioned horn.

Upon further inspection of his surroundings, Frank looked around to discover old vehicles and people wearing hats and macs, head scarves and full skirts dating back to the war.

Approaching the shop, Frank noticed a woman in modern clothes standing outside, who looked just as confused.

The pair expressed their confusion but found the building did appear to be Watertone’s once inside.

Frank had worked as a Police officer with a very logical view of the world, yet after this chilling experience he never stopped talking about it!

Similar reports have seen people transported back to the same era, seeing old shops, surrounded by different pavements and being past by old fashioned cars.

One account of a thief in 2006 is particularly striking. The story tells of shoplifter Sean, who was running from a security guard down Bold Street.

Starting to panic, he ran to a newspaper stand in disbelief and found the date read 18th May 1976.

Even more strangely, the security guard later reported that Sean had disappeared entirely while he was chasing him!

So, if you’re feeling brave enough, why not take a look for yourself and stroll the most haunted areas of Liverpool?

At Signature Living, we’re based in the heart of the city centre, so you’ll find the most mystical sights only moments away.